51%RememberHer – A cultural return for Plaistow.. 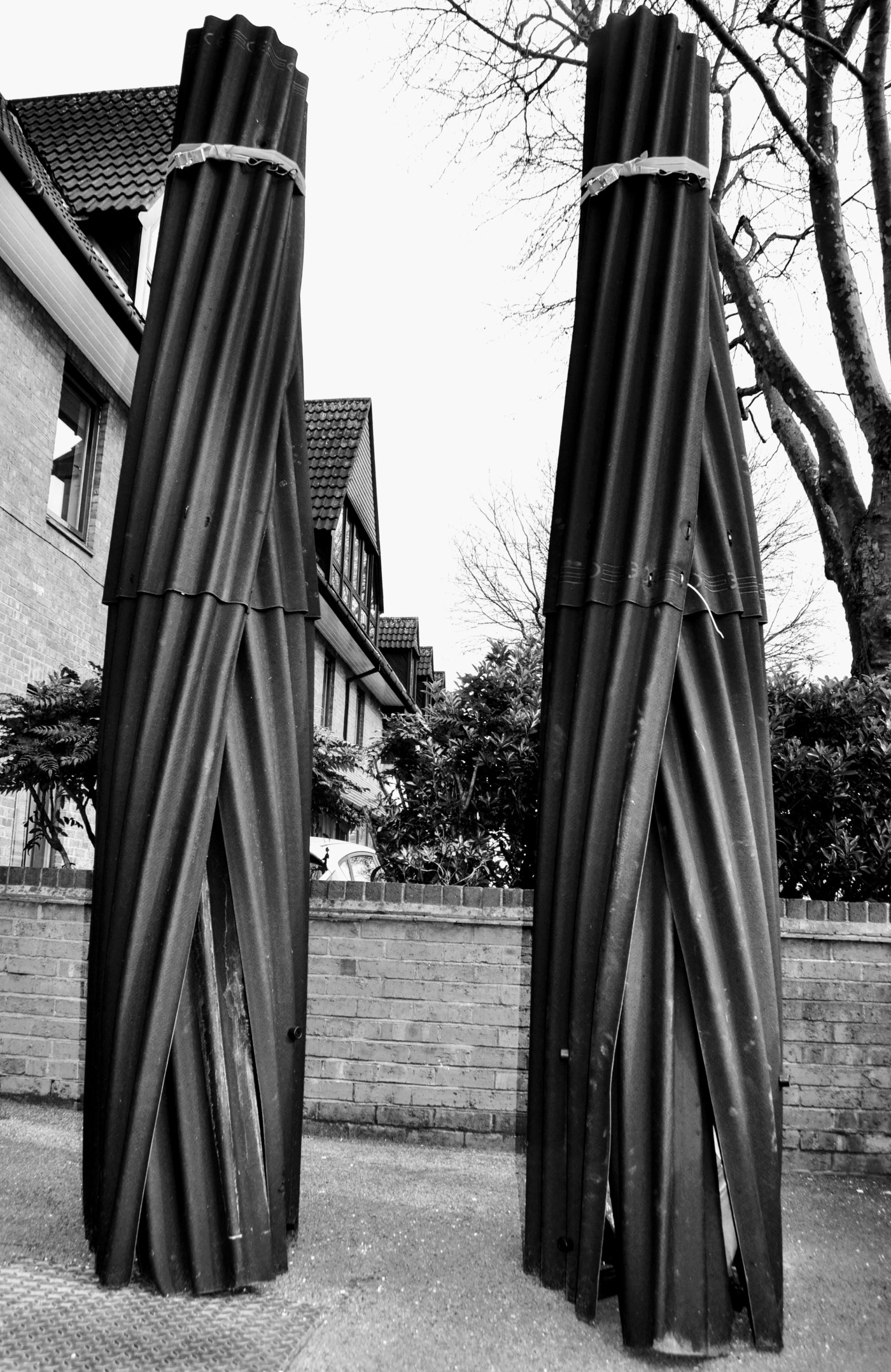 In my last post here over a month ago (yep, I vow to write more often, but enjoy wandering around posting pics of curiosities in the East on my instagram feed so much more – follow it, follow both!..) I wrote about stumbling upon the artwork of an old colleague while doing a Plaistow history walk at the end of January (that’s it up there, Sian-Kate Mooney’s DARKWAVE II).. Well, the exhibition it’s part of opened this week, and here’s a little piece on it..

Firstly, forgive me – I can’t claim to be anything close to an art critic. But I do love cultural expression, buildings, identity issues, history, general-eye-catching-stuff and more than all these things, the paradise that is Plaistow!..

So, #51%RememberHer is a new exhibition of contemporary art by women of the East End and had it’s official opening on Wednesday evening to celebrate International Women’s Day (March 8th), and public opening on Saturday (March 11th). It’s in the (rather lovely) between-the-wars Byzantine influenced grandeur of the  Memorial Community Church on Barking Road (my favourite thoroughfare in the world). I popped along briefly on Wednesday evening, returning on Saturday to get some images in daylight.

The exhibition occupies the pop-up gallery space of the east tower of the church – otherwise known as the Tower Gallery – an occasional gallery, which will hopefully be a more frequent/permanent fixture for E13 moving forward. It’s an external event by  Elements Gallery of Hackney, and Curator Rebecca Feiner. A broad variety of installation, photography, painting, graffiti, drawing and sculpture by women highlights the ongoing struggles, and the place and role of women in history and society. And simultaneously provides some needed cultural/creative impetus to E13..

Plaistow is an inspired choice of area to host the exhibition – the role of the wider east London in the struggle for workers’/human/womens’ rights, particularly the Suffragette movement are well known. And the immediate area’s role in all manner of social reformist and progressive movements cannot be underestimated..

It was in the wider West Ham constituency that Keir Hardie became the first Socialist MP in the UK in 1892. The role of unionist Will Thorne and others in what we now call Newham led to increased workers’ rights around the same time. The old Borough of West Ham became home to many Missionary and Philanthropic organisations in the Industrial Age. And then there is the role of women, represented for instance by our very own locals Elizabeth Fry the prison reformer, and Daisy Parsons, the first female Mayor of the Borough of West Ham to name just a couple.

On Daisy Parsons.. She had grown up in difficult conditions in Canning Town, left school at 12 before going on to become a Maid to a Mr McCall, the Chief Librarian of Limehouse Library.. She developed an interest in Politics and World Affairs and after later working in harsh conditions at the Carreras Tobacco Company in Aldgate, and meeting her husband who was an active member of the Electricians Trade Union, she become a member of the National Union of Woman Suffrage. They married in the Congregational Chapel a short walk down Barking road from the Tower Gallery..

Daisy was part of the Suffragette delegation with Sylvia Pankhurst who met the Government’s Board of Trade in September 1914 shortly after the outbreak of World War I to raise issues such as the cost of living, the erratic food supply, and the tedious work done by women. Daisy was active in this meeting, delivering a powerful and assertive argument to the establishment..

Daisy went on to establish a Mother and Child Welfare centre in West Ham, to assist women whose husbands had died in the war.. In 1936, she was appointed the first female Mayor of West Ham.. There’s a lovely little mural about Daisy Parsons on a dilapidated brick electrical box station on Hermit Road that we visit on my Plaistow history tour. It looks like it might collapse at any minute, so go visit it soonish..

Daisy’s story provides great context for #51%RememberHer – it feels right that the exhibition should be here and the building lends itself well to the exhibits..

I’ve written about the building before, but it was great to see the inside. I wasn’t disappointed – it’s glorious, with its oak panelling and seating, an impressively high balcony-gallery, and some beautiful intricate window work, the interior doesn’t let the amazing  exterior down. The exhibition is displayed around the upstairs balcony space, and around the stairway in the tower, ultimately leading up to the bell-dome housing the impressive commemorative bells, the most important example of their kind in the country (see previous post..).

I offer no critique of the artwork, but I was obviously taken with Sian-Kate Mooney’s work at the entrance, and also with the array of photography, paint and drawing placed on seating at the rear balcony, and the clusters of black plastic buckets placed up the beautiful stairwell which I couldn’t help being drawn in by. Apologies to the artists concerned – I didn’t get the info down on all the creators (but do let me know and we can do links..).

I caught up with Sian for some more background on her work.. “D A R K W A V E II is inspired by the 1933 film King Kong directed and produced by Merian C. Cooper and Ernest B. Schoedsack. On the surface, King Kong is the classic tale of ‘Beauty and the Beast’. Sad and lamentable, it has passages of true horror and violence yet what cannot be ignored is the strong racial metaphor; the menace of the sexually potent ‘black’ figure, Kong who is in pursuit of the ‘white’ woman victim symbolising innocence and a threatened ‘white civilisation’. ..The context of the film, the Depression, hunger marches, the rise of the Ku Klux Klan, and race riots is hauntingly similar to the current political climate…” 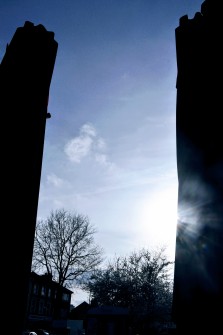 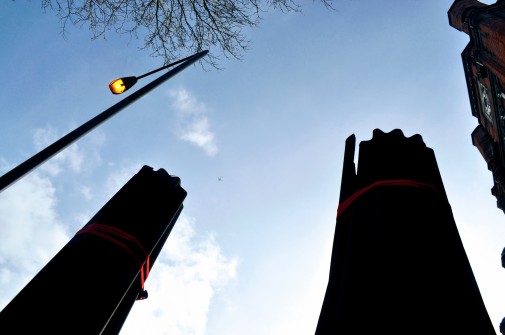 Dark times indeed, but I was around at the right time to catch the sun disappearing behind DARKWAVE, and for the streetlamp coming on – there’s a lot of metaphor there about light & dark for someone with more imagination than me…

It’s fabulous to have the exhibition in Plaistow. E13 and the immediate surroundings have been a bit of a cultural backwater for too long, given that other parts of East London have thrived as arts hubs.. Though It does have a proven back record in many areas of the arts, creative, and cultural fields..

From the world of stage & screen, Terence Stamp, Honor Blackman, and Idris Elba are the most noteworthy with Plaistow/Canning Town connections.. In music, the muso’s muso Joe Brown (UK pioneer in the Rock n Roll era, best man to Beatle George Harrison) grew up in the now demolished Sultan pub in Grange Road E13.. The Human League filmed their video for their 1983 single ‘Fascination’ in a derelict house the other side of the Greenway from there!.. The Small Faces came from just up the road in Manor Park..The now demolished Bridgehouse pub down at the end of Barking Road in Canning Town was a legendary venue and played an early role in the careers of Iron Maiden, U2, Depeche Mode to name a few.

So let’s hope we see plenty more culture and creativity coming back to the neighbourhood soon.. #51%RememberHer will be open 13.00 – 18.00 on Tuesdays, Saturdays, and Sundays until April 8th, with lots of other activities scheduled along the way, and is FREE. No excuses for not getting yourselves down there to support the Artists, Plaistow, and the MCC if you can..

3 thoughts on “51%RememberHer – A cultural return for Plaistow..”