The Glow project, which brought together works by various artists, and members of the community in Barking and Dagenham, East London, produced a winter festival of lights at this grand old Tudor manor house.. A marvellous bit of symmetry, given that Eastbury House allegedly played a role in the hatching of the Gunpowder Plot, which would have set light in a different kind of way to another old London building!

It was an excellent couple of hours, and at just a fiver and free for kids, brilliant value for a quality project of this scale.. And even better, any profits will go straight back into the community cultural scene. Produced by the superb people at Studio 3, Glow set out to  provide an interactive couple of evenings of light, fire, arts and creative workshops with a focus on the illumination of shapes and movement. The works by established local and international artists were supported by the efforts of the 700 locals involved in making Glow happen.

Studio 3 deserve a lot of credit for their amazing work in the community, and the people of Barking deserve a big pat on the back for their engagement in Studio 3’s projects. Besides Glow, they recently held an ‘Open Estate’ event as part of London Open House, and I got the opportunity to chat with Rosie and others members of the team (belated post to follow, apologies). They are deeply involved in all forms of visual and performance arts in Barking, and do a lot of good work in bringing people together in what has been perhaps an atomised, disparate borough, and the one in which i was born and spent my childhood many moons ago..

As a kid, I had family and friends living very close to Eastbury House – we’d illicitly play football on the south lawn of the house hoping nobody was in to shout at us.. It was a bit transcendental at times at Glow – finding myself not being shouted at for trespassing; discovering a sea of fire torches in the privy garden, inspiring thoughts of arcane rituals in a place we knew not of what mysteries dwelled inside; finding rope-lights sketching out lines like a pitch on the very grass we used to enjoy a kickabout; gravitating towards the orbs in the enclosed courtyard, imagining each of them as lost balls i kicked over that wall thirty years ago..

Anyway, it was great, and here’s the pics:

Francesc Serra Vila  .. On entry, the word GLOW plays around with depth and your movement. Sometimes appearing as a neon jenga in freefall, and other times any number of shapes or words depending on your perspective. It encourages movement between its tubes so you become part of it. Brilliant!

Khushnood Ahmed .. Neon flowers line the gravel path of the grand entrance to Eastbury House, conjuring thoughts of the backdrop to a Tudor rave..

Ithaca .. Whispering Trees – lights coil around the trunks of newly-bare trees, and activate by voice cue into a nearby microphone. They respond well to a softly spoken ‘wake up’, and are rather lovely..

Susie Olczak .. The projections are Tudor era motifs to suit the house, and evoke snowflakes, summoning the coming of winter.. 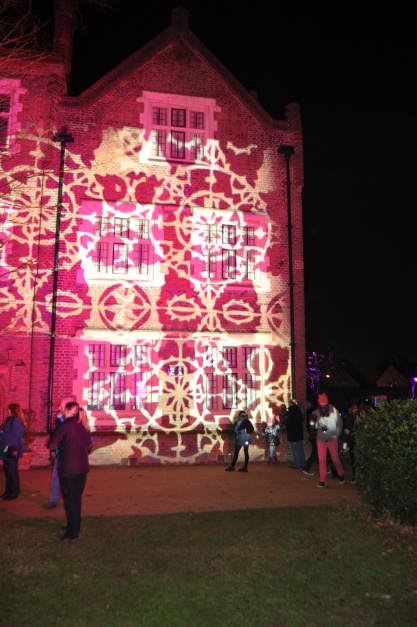 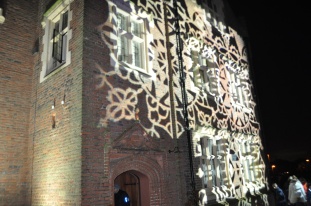 PaBoom… Processionary routes of fire-torches and lanterns in the Privy Garden, tribal looking and a bit post-apocalyptic.. It felt like a magick scene in a high-end fantasy movie..

Émilie Queney… The glowing wall installation inside the house looks like it could have been made from white-hot bricks removed from the fireplace..

Grace Crannis and Emily Briselden Waters.. In a part of Eastbury House no-one ever dared to climb in to, the orbs makes me think of decades of lost balls stuck in the tangled branches of an ancient courtyard tree..

Cathy Stewart and Mark Holtom .. The Rope Lights mark out an imaginary-pitch-cum-landing-pattern on the lawn..

Out by the food and drink area, a riot of neon chalks, tape, paper and crayons illuminate tables, chairs, noticeboards and trees, as kids sporting strip-lighting wander by. It makes me think of how we might have imagined future school back in the 80’s. Elsewhere, an electronic red rose signifies the coming together of the Olde Englishness of the site, with the imagined futureness of the subject . And it’s all marvellous. 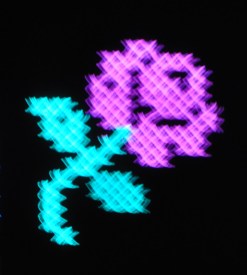 Handheld Arts… Incandescent – thoughts and words that make their makers glow.. The loves and dreams of locals captured in warm, glowing jars to the backdrop of the scent of lavender.. Lovely.

Back in the Grounds

Jana Matejkova.. Wish Comet – a neon dart from future/space composed of festival wristbands.. I couldn’t hear the sound element, but enjoyed the way it flickered in the cold night breeze.

Ian Wolter… The View From Here – A beachball planetarium protected/trapped by a ring of fire, which made me think of sacrifical offerings and how if it were found by our descendants it would be interpreted as an occult astrological icon… The pics do not do it justice, but it’s quite impressive and a lot of fun..

So, in conclusion, thanks to everyone involved for bringing us Glow. It felt like being in a fictional never-time where pasts and futures danced around without landing in now.. It was excellent, and really good for Barking – we had nothing as exciting going on when I was growing up there.. Long may all your good work continue. 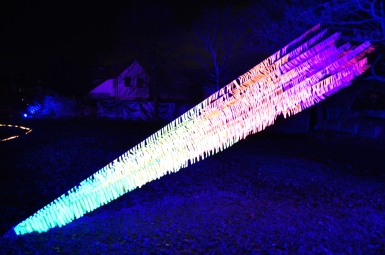