Accidentally blagging your way in to a hidden 180 year old building.. 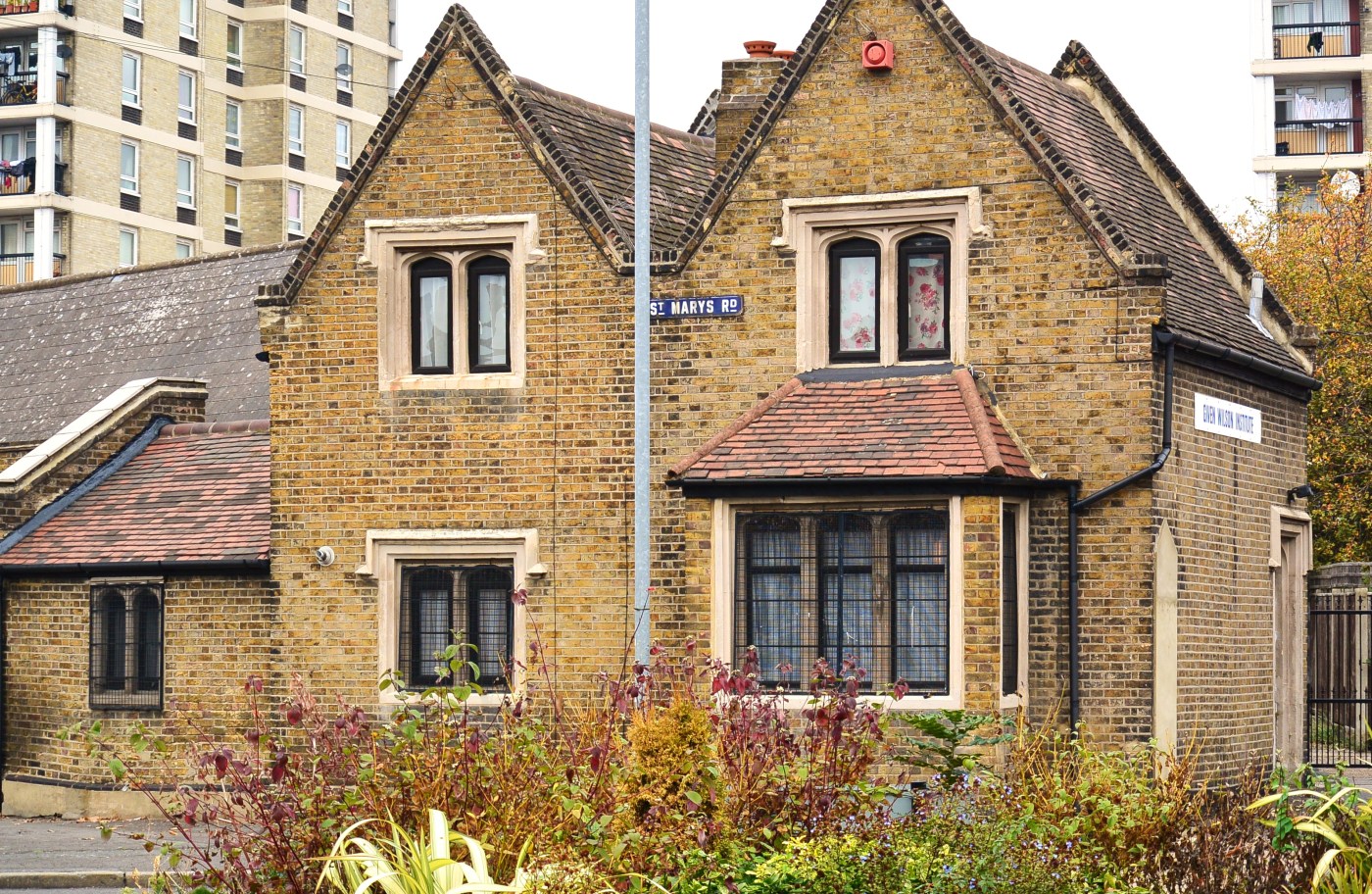 There’s a little puzzle I’ve been keen on trying to solve for a while now.. There’s a park in the back streets of Plaistow with ancient gravestones in it – it doesn’t have a name, just ‘Public Space’.. 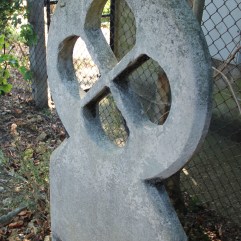 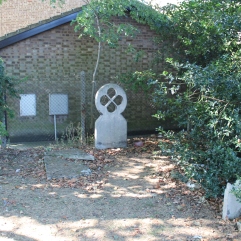 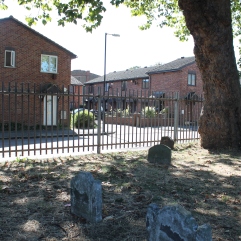 The gravestones are right by the entrance to the park. To the left of this entrance a few modern buildings, and then, framed by 1970’s high-rise blocks, this little beauty.. 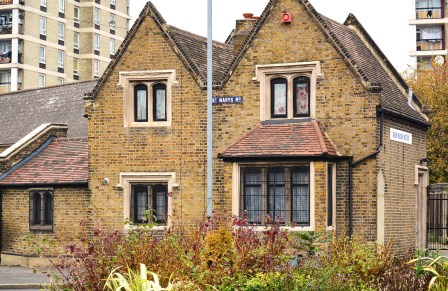 A 60’s-70’s looking sign on the side names it as the Given Wilson Institute – quick research informs me it’s a registered charity which in the past has had a focus on youth organisations (Scouts, Guides, Newham Youth Centre), and named after a former Reverend at the Church. But the building now seems to have no function.. Not derelict, but unused – I’ve never seen anyone going in or out, never seen the lights on, but it looks clean and tidy..

Anyone with a bit of knowledge of East London history can figure out that the building and the graveyard would have been connected historically. I’ve many times thought a late 1800’s church should be between the two – Plaistow was still a country village until quite late in the 19th century..

So it would seem obvious that this probable church, and its graveyard, must have been obliterated in the Blitz of 1940-41 – this area is full of Victoriana-Edwardiana punctuated by post-war building developments of ever decreasing aesthetic quality..

So I struck lucky a couple of days back, when I went for a stroll to take a few pics of the plentiful old buildings left in the area, and while I was snapping the pic above, a couple of chaps approached..

‘Girls School’ said one, in a rapid Scots accent.. ‘Ah i see, I’d guessed it was a Vicarage’…’Na.Ye coming in?’.. And so it was I found out all about this lovely little gem of a building in the back streets of London, E13.. 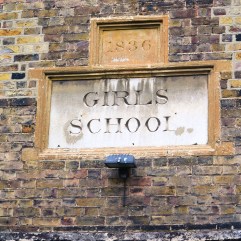 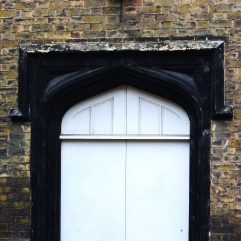 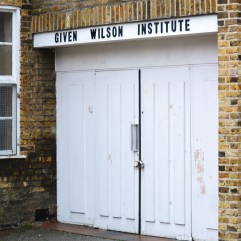 They were maintenance guys – Angus and Mick, coming back from lunch on an infrequent visit to the building. I’m getting quite lucky with being in the right place at the right time!

They opened the gates, unlocked the building and let me explore.. It transpires that it’s an 1836 building – much older than I’d expected, and yep, built as a Church School for Girls. 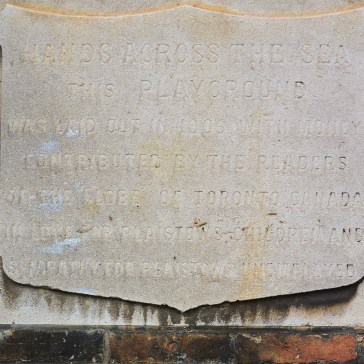 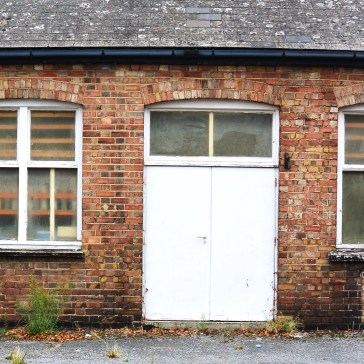 In the yard, the worn plaque pictured above reads ‘HANDS ACROSS THE SEA – This Playground was laid out in 1905 with money contributed by the readers of the Globe of Toronto, Canada in love for Plaistow’s children and in sympathy for Plaistow’s unemployed’. I’m told how some money has been secured to renovate the inscription.

The text reveals the poverty conditions in East London at the turn of the last century. Conditions which gave rise to Keir Hardie becoming the first Socialist MP in the UK, for this very constituency. Apparently, Rev. Given Wilson wrote and dispersed pamphlets around the world highlighting the plight of the working classes in East London. It reveals a point in time of the cities of the Empire eclipsing the East End in health, wealth, and hope..The people of Toronto reading about the slave-like conditions and shocked into acts of charity for the old country.

Inside the building. black painted oak beams are the only evidence of its age; the flooring and kitchen utilities are relatively recent. The floor in the dining hall has recently been relaid in lacquered wood to original design standard, so I’m informed. The original serving hatch from the kitchen to the hall is still in use.

A commemorative plaque respects some dead – I’m told from the direct hit the former adjacent church took during WWII. There are no remains of the church, which itself was an 1894 rebuild, just the few gravestones in the park, and this building..It’s surprising then, that my after-research tells me that the church was indeed damaged during the Blitz, but was fixed and ultimately demolished in 1977 – not because of war damage, but simply because it was too big for its dwindling congregation! A 1980’s further rebuild exists to the north of this site..

The chaps inform me the building is now used on occasion by the elderly folk of Plaistow. Some sports equipment lingers from its use as a Youth Centre – there were once snooker tables in this part of the building, until they were stolen. Some other original features had been removed for display for the Museum of London, were placed in the yard, and were then also stolen..The chaps explain how the tower blocks behind the old school provide a perfect viewpoint for comings and goings at the site.

An exit from the erstwhile snooker hall takes us into an outdoor space where classrooms once stood – I’m told these were only cleared away in recent years. Dangerous, apparently. You can see bricked-up door arches, windows, and fireplaces for the classrooms in walls in the pictures below. Industrial age relics stir my imagination in ways random ruins of a castle cannot.. 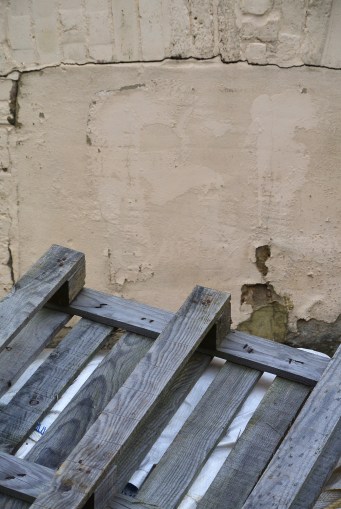 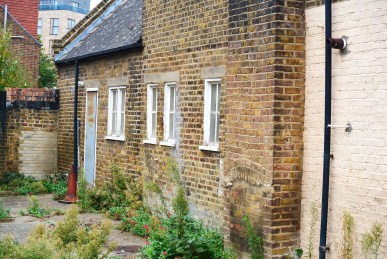 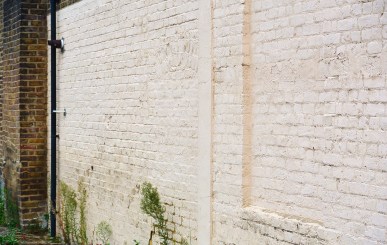 It’s an evocative space outside, and the Teacher in me envisages ragged schoolchildren cramped up to fifty a room in this enclosure, occasionally warmed by open fire. Reading, Writing, Arithmetic, Gospel, and training for womanhood.. And probably canings, dunce-hats, and other nefarious school punishments.

After re-entering the building, the chaps find a photocopy of a picture of the church and school taken some time before 1940.. The school building is clearly on the left.. On the right side where the tree stands is the graveyard – the spot where the worn gravestones now stand in the park in the pictures above.. And whether true or not, I’m happy to believe it’s the same tree as in the gravestone pictures.. 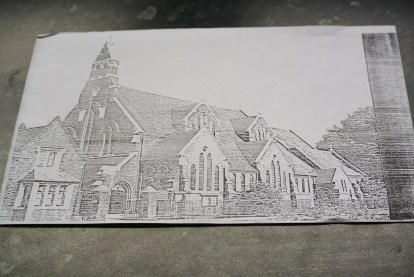 It’s nothing new to me, but being so close to the reality leaves me a bit saddened at the destruction of such amazing buildings both during the war and because of demographic change in the post-war period.. But also gladdened that so many, like St Mark’s at Silvertown, and St Luke’s at Canning Town somehow survived.  As the years go by, and glass and steel erupt in any available sliver of East London space, this architectural loss somehow becomes more poignant. And it makes great symmetry to me that the last of the local-born old folk now use the building exclusively, if perhaps infrequently.

The chaps now have to get on with some maintenance work so it’s time to move on. I thank Angus and Mick, and as I leave, I promise myself that I’ll find out when the old folk meet there.. It would be great to hear their stories and it’s a long-shot, but maybe some folk are still around who hold memories of this wonderful old space?.

10 thoughts on “Accidentally blagging your way in to a hidden 180 year old building..”