It was a bit of a privilege to be able to explore the Bata sites in East Tilbury as part of the Essex Architecture Weekend in September, organised by Radical Essex. You may remember Bata, the Czech shoemaking company making utilitarian, affordable, high quality shoes for working people.. The event was a kind of mini Open House project, but with a focus on radical thought and design, and the the role of Essex in the Modernist movement.

Walking from Grays station, an uphill journey takes in the well-turned-out Little Thurrock before a woody slope to Tilbury marshes.. Grays Town hasn’t fared well in recent decades – the opening of the monstrous Lakeside mall and its satellite retail parks acting as a vampire on the lifeblood of its closest proper town. Run down, unloved by its inhabitants, its greatest architectural feature the abandoned 1930’s State cinema. There are flourishes of how Grays sees its future – some public art pieces dot the town, the new South Essex College campus provides a new focus linking the Town centre and the riverside, areas cleaved through by the broadsword of the C2C railway.

Unable to walk the full riverfront (the sprawling Tilbury docks compound reaches Grays riverside), heading north through Grays Town, then east uphill towards Little Thurrock, another Grays is revealed. Enormous balconied Victorian houses overlook the incline of Orsett Road, revealing another reality when these lands were rural –  an escape from the London beast for the 19th century monied classes. In the streets behind these edifices is the Dell – home of Alfred Russell Wallace who independently conceived the theory of evolution, later collaborated with Charles Darwin, only to be eclipsed by him in history – ignored, kicked to the side, as Thurrock is to Greater London.

At the apex of the hill sits Little Thurrock. Unremarkable its looked-after-ness, a not quite village with its own little shopping street, Tesco intimidating the local boutiques.. The War Memorial offers brevity in its dead-list, no more than thirty names inscribed upon it showing evidence of a mainly post-war crown of developments on top of the hill. Walking on.. To superb views from the cemetery over the ominous cranes of Tilbury Docks to the Kentish uplands..

Then downhill, through open parkland and over the flatlands.. Swampy fields, home to depots, Asda, and the Travellers training young nags.. Past the shabby-yet-hopeful Tilbury town – probably the last affordable neighborhood to buy property in the wider London area (London house prices have reached Grays/Thurrock in the last two years – 4000 individuals escaped London for Thurrock in 2014/15)..

Along the impounded sprawl of the deep-water container port of Tilbury Docks to the Gravesend ferry, existing in some form since the dawn of time.. Adjacent to the London International Cruise Terminal – the landing berth of the ship Empire Windrush which brought the first wave of post-war immigrants over from Jamaica in 1948, and the point of departure for thousands of ‘Ten Pound Poms’ to Australia…The Cruise Terminal was shortly to host part of the Estuary 2016 Arts festival –  a signifier of a future regeneration of the area..

Moving on, taking the Thames path past Tilbury Fort, past the heaven-bound smokestacks of the Tilbury Power Station – soon to be demolished – and on to East Tilbury and Coalhouse Fort.

Links in the last line of London’s military defence  – against the Spanish, against Napoleon, and against Hitler.. It was in Tilbury, 1588, that Queen Elizabeth I had made her famous “I know I have the body of a weak, feeble woman; but I have the heart and stomach of a king..” speech to her troops awaiting the Spanish Armada..I’m sure she was being sarcastic.

Picture the scene.. It’s sometime, anytime, in the 1940’s-60’s, the height of Czech shoemaker Bata’s UK success, and for the umpteenth time the town siren whirs into action signalling a well earned lunch break for the town’s workers. Hundreds of shoe makers exit the factory gates for a restful half hour away from the clank, slice, puff, thud , grind of the Bata UK shoe factory..

They are parents, siblings, offspring, spouses and friends, and they are all neighbours in the Bata workers village. They advance past the white cubes of the factory buildings – shoe-box structures reflecting their ultimate function..Through the factory gates and past the Bata cinema hall.. Across the road to the Bata canteen for their Bata workers’ lunch, like artifacts on a conveyor belt.. Above their eating place, the rooms of the Bata hotel for Bata dignitaries and Bata family guests.. 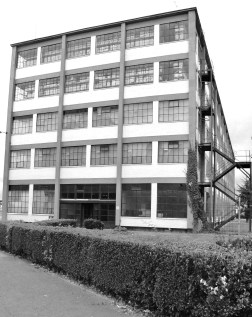 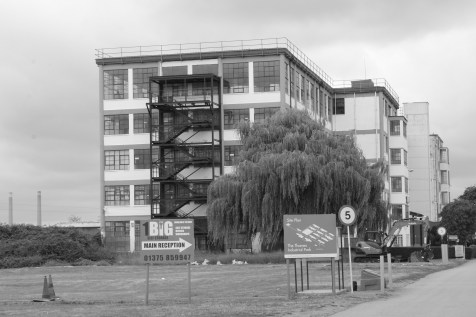 They eat a nourishing meal made by the Bata cooks, filling their boots for their well paid toil.. Then.. The brassy belch of a recorded marching band bursts from the town tannoys signalling a rhythmic progress back to workstations.. Down a slope to speed up the newly nourished Bata women and men on the short walk back through the steel gates..

In the evening, the Bata families will seek leisure and pleasure in the Bata Library, the Bata cinema, the Bata sports fields and lido, or maybe lend a hand at the Bata dairy farm.. They work hard, and they are happy. Respected and well looked after by their employer, happy workers make productive workers.. They were paid fairly, and housed well in their Bata homes – properties other factory workers might only dream of..

Fast forward to 2005, and the sirens whir one last time as East Tilbury says goodbye to its beloved Bata factory – it can no longer function in the global market place. After 70 years, millions of shoes, thousands of workers and hundreds of births, marriages and deaths, films, lectures and milked cows later, the Modernist utopian dream finally breathes its last.. 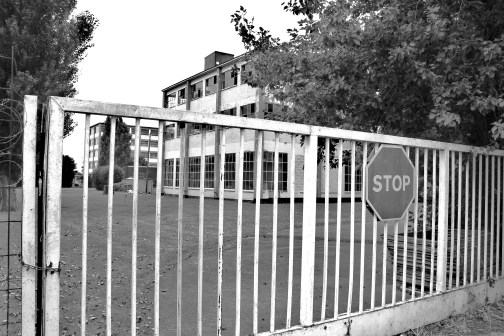 Today, the clock (with its own lovely little canopy shelter) on the security block forlornly states a permanent five to twelve. It’s easy to imagine it being the fateful moment in which the gates closed for good. A sad moment, but one that affected not thousands – at the end, the site employed only a handful of people quality checking the mould-made shoes. Were the workers allowed a half day – hours at half mast, like a mourning flag, and given a five minute freebie for a silent goodbye to all the Batians that had gone before?

The factory site continues its own story – the buildings are used, and are they are protected. The site is home to a multitude of small industrial operators, self storage units, and at the back I found a graveyard of bus-stops and street furniture. Skeletal pieces of pavement utility from London given a decent countryside burial.

The Bata experience continued at the home of a lovely Bata born lady (May i believe) who explained she has lived her whole life there.. Her Czech parents were brought over by Bata in the 1930’s when the company escaped the threat of Hitler in the build-up to World War II.. 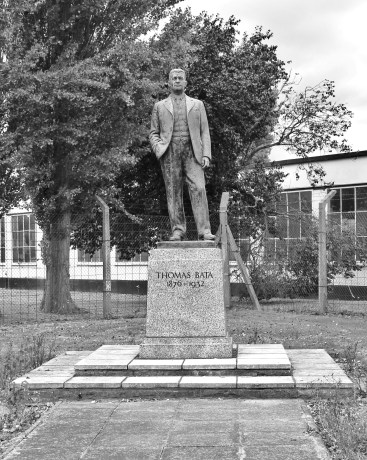 Thomas Bata, being a forward-thinking chap, decided that rather than leave the original Czech workforce to their fate, he would offer them a chance to move to his new premises in the safety of England. East Tilbury was an attractive site to Bata – semi-rural, fresh bracing air funnelling through the Thames estuary, and over the meditative marshlands. Green and pleasant land, close to sea ports, close to London, but detached enough for a better quality of life. Purchased from a farmer and carefully stitched on to the existent East Tilbury.. A sparse hamlet row of farmers houses, ancient village church, a marshy frill as land meets Thames, and aptly, the military fort securing the Thames from real and perceived threat for almost a century.

It’s an awful irony that Bata, seeking figurative refuge behind a military stronghold that would go on to provide anti-aircraft defence for London in the Blitz, would die in a civilian aircraft accident before his UK utopia was actually completed. His son Thomas John would oversee its completion, its rise, and it’s decline.

The open house is on the largest tract of Bata homes – a conservation area, recognising its historical importance.  It’s a continuum of straight lines, right angles, boxy shapes, all inferring the work of its one time occupants.. The sharp corners contrast wonderfully with the flexed, windswept trees nearby. From the layout of the estate, to the flat-roofed house, to the garden and its perfectly pruned hedge; BataVille is a series of squares and cubes. Functional streets and houses which maximise space.. Boxes for shoe people. 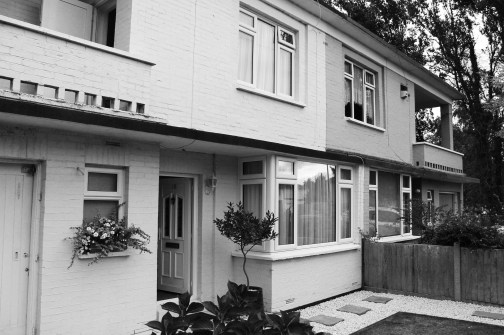 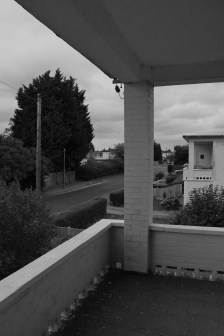 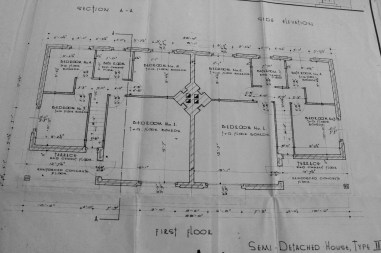 May explains that most houses are owner occupied, and that most belong to recent incomers, though a fading number of Bata originals still reside here. I’m told how from the 1970s onwards, Bata shifted its manufacturing to the countries East Tilbury once exported to.. And as machines started to replace humans, the factories were gradually wound down, having its inevitable effect on East Tilbury’s population.

Today, nestled secretively behind the former Bata Hotel/Canteen, the excellent Bata Heritage Centre pays homage to the people, buildings, and history of East Tilbury’s Bataville. It’s one of those small, site specific museums that I love – they delve into fine detail, the volunteers speak of the names of ghosts as if I should know them personally. The volunteers are former Bata workers, advanced in years, and it is worrying that the next generation of Bata story tellers is absent..Meanwhile, lovingly placed exhibits tell tales of Bata’s involvement in football World Cups, inventions of rubber shoe styles, and of the individuals who once propelled the global success of the company..

Soon, up to 10,000 new homes will be built around Bataville. As part of the vast Thames Gateway plan, East Tilbury is earmarked for mass regeneration. The Bata Heritage Centre holds regular open days, and if you get the chance, I would urge you to get along to one soon. Before the character and stories of this splendidly isolated workers’ utopia in the swamp are themselves swamped, by unknowing, unattached newcomers..